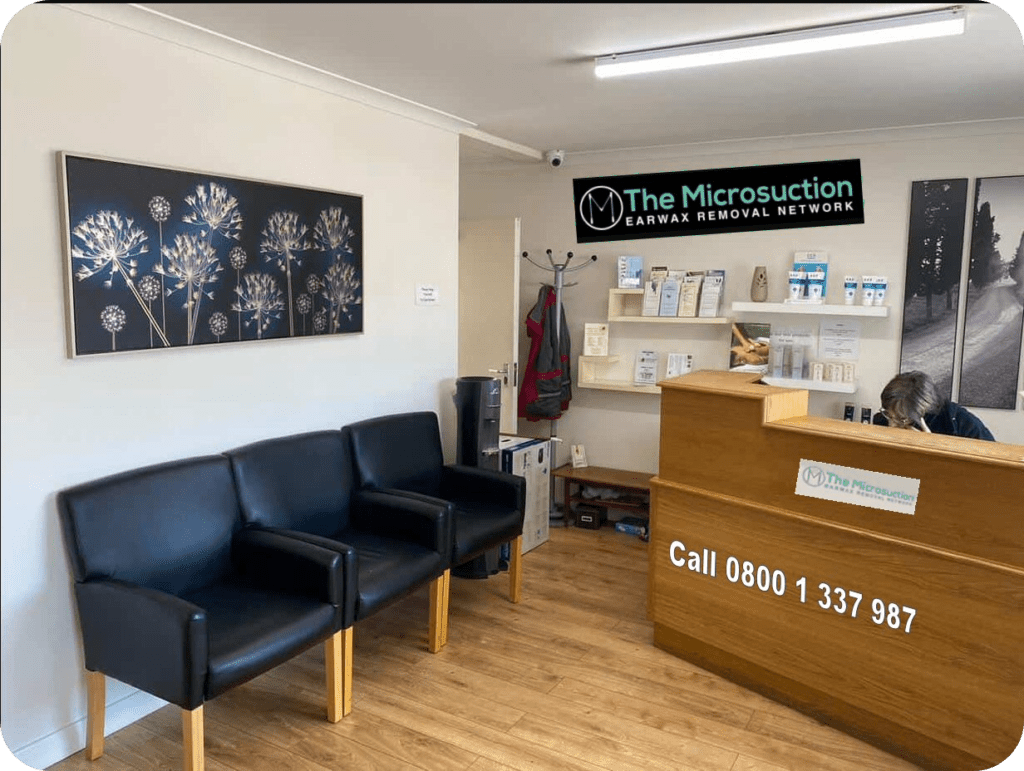 Treatment for hearing loss. The doctor can remove excess earwax using a curved device called a curette or microsuction method. The doctor may also use a medical syringe filled with warm water, salt, or watered-down hydrogen peroxide to remove the wax. Medicated drops, such as carbamide peroxide, may be advised to soften the earwax.

Because these drops are known to irritate the fragile skin of the eardrum and ear canal, use them only as directed. If earwax persists, you may need to see your doctor once or twice a year for cleaning. Your doctor may also advise using earwax softeners like saline, mineral oil, or olive oil.

Asymptomatic cerumen impaction may resolve on its own. However, if you experience earwax impaction symptoms, you should consult your doctor. The signs and symptoms might be indicative of another illness. There is no way to know whether you have too much earwax without having someone examine your ears, generally your doctor.

Signs and symptoms such as ear discomfort or hearing loss may not necessarily indicate the presence of earwax. You might have another health issue that requires addressing. A healthcare expert most safely performs wax removal. The ear canal and eardrum are fragile and easily injured structures.

Do not attempt to remove earwax by introducing something into the ear canal, such as a cotton swab, if you have had ear surgery, have a hole (perforation) in the eardrum, or are experiencing ear discomfort or discharge.

We talk about earwax when it has collected so much in the ear canal that it is causing problems. Understanding that most individuals never need to clean their ears is critical. The ears are meant to self-clean. When people use cotton buds or hairpins to clean their ears, earwax builds and frequently becomes clogged. This merely pushes the wax deeper into the ears and may cause ear damage.

Tinnitus is caused by one of the following factors in many people: Hearing impairment. Tiny, sensitive hair cells in the inner ear (cochlea) move as the ear absorbs sound waves. This movement can cause electrical impulses to go down the auditory nerve. The brain interprets these impulses as sound.

Earwax serves a crucial function in the body. It assists in the removal of dirt, debris, hair, and dead skin cells from the ear canal. Earwax keeps the ear canal from becoming itchy and painful, as well as lowering the chance of infection. It also aids in reducing ear canal discomfort caused by water entering the canal.

Although earwax is beneficial, too much of it can accumulate and obstruct the ear canal, resulting in hearing loss. This blockage can be caused by your body producing too much earwax, but you can also induce it by cleaning your ears with a cotton bud or other device that forces the earwax into the ear canal.

Earwax obstruction is typically caused by excessive earwax production or a lack of regular cleansing. Surprisingly, incorrect earwax removal at home is the most prevalent cause of earwax obstruction. Earwax is frequently not removed but instead pushed further into the ear. Wearing headphones can also cause earwax buildup because they inhibit the normal outflow of earwax from the ear canal.

One of the most common reasons for earwax buildup is that the ear secretes more earwax than the body can dispose of, resulting in earwax buildup. This issue can be caused by various medical diseases, including bone obstruction (osteoma or exostosis), ear canal narrowing (which can occur at birth, after an injury, or as a result of a persistent infection), and skin conditions such as eczema.

Lupus and other autoimmune illnesses Infectious disorders such as otitis externa, sometimes known as swimmer's ear. Some of the disorders listed above can create a physical obstruction, while another is that the body generates more earwax. There are several circumstances in which the source of earwax is unknown. Objects placed into the ear can potentially induce earwax obstruction, especially if they are inserted more than once. This is more common in young individuals and children who do not have ear problems.

Either excessive earwax production or insufficient cleansing typically causes earwax obstruction. Surprisingly, improper earwax cleaning at home is the most common cause of obstruction. Earwax is frequently not wiped out but rather pushed further into the ear. Earwax buildup can also be caused by the use of headphones and earplugs, as headphones can hinder the normal outflow of earwax from the ear canal.

A buildup of earwax or a blockage can be uncomfortable and negatively influence your health. Ear discomfort or a “full” feeling in one's ear, muffled hearing, dizziness, or ringing in the ears are all symptoms of a blockage.

What does it mean when earwax accumulates?

Earwax is natural. It is the body's natural method of ear protection and cleansing. Hearing can be harmed if too much accumulates or gets degraded. If you see earwax buildup in your child's ears, this might be a symptom of a problem and should be evaluated by a professional as soon as possible. If your kid exhibits signs or symptoms of hearing loss, he or she should be evaluated as soon as possible. Early identification and treatment of hearing impairments will assist your child in reaching their full life potential.

If you have too much earwax or an earwax clog, ear drops may not function (when a solid earwax plug blocks the ear canal). If the problem is a plug, placing peroxide in the ear might aggravate it since it softens the clog but does not dissolve or remove it. The softened plug then forms a sludge wall that can further obstruct the ear.

Ear irrigation is a method in which an irrigator injects water (at body temperature) into the ear while regulating the water pressure to minimize ear damage. The water's mild action softens and loosens the earwax, which is then transported out of the ear. Our audiologists are not only fully certified but also undergo further specialized training in ear irrigation and ‘dry cleaning' (keeping the discharging ear dry), which aids in the prevention of hearing loss.

Although earwax accumulation seldom causes significant issues, different cleaning procedures can result in other diseases. Patients may have the following symptoms in some cases: ear pain/ear sores in the ear canal If you are predisposed to earwax owing to a medical condition, consult your doctor about preventive measures.

Earwax falls typically out on its own. It is the body's technique of cleansing and excreting debris from the ear canal. However, earwax can become lodged in the eardrum or totally block the ear canal. Tinnitus, or ringing in the ears, is known to be caused by earwax. This is why, in some cases, repairing hearing loss is as simple as cleaning earwax. You might be tempted to use a cotton swab to clear the earwax. Don't.

Ear infections and earwax buildup raise the loudness of the voice; therefore, persons suffering from these conditions may talk quite quietly. Wax accumulation can also push on the vagus nerve, resulting in a persistent reflex cough. Finally, according to Chartrand, it can cause eardrum constriction, resulting in ringing in the ears that sounds like a murmur or humming.

Ear irrigation involves injecting water into the ear with an irrigator to remove earwax. The irrigator regulates the pressure of the water sprayed directly into the ear, which aids in loosening, softening, and removing the embedded earwax.

Does the colour of the earwax have any significance?

That's correct, not all earwax is created equal. It is available in two varieties: wet and dry. Just like eye color, which kind you have is determined by your DNA. Wet earwax is the dominant gene, which means it is found in the majority of people. People of East Asian heritage, such as those from China or Korea, and Native Americans, are more likely to possess the recessive dry gene. This is a piece of crucial information for anthropologists studying the migration of various civilizations throughout the world.

When the skin of the ear canal peels, the earwax is pulled to the outside of the ear canal and pours out on its own. The color of earwax ranges from pale brown to dark brown to orange. Earwax in youngsters is often smoother and lighter than in adults.

Usually, removing earwax is not essential; the ears do it automatically by eliminating the surplus. However, earwax obstruction can develop when the ear glands create more earwax than is required. People who wear hearing aids or earplugs or who insert things such as cotton buds into their ears, may be more vulnerable to these issues.

According to a study published in the journal American Family Physician, around 10% of youngsters and more than 30% of elderly and cognitively challenged individuals had excessive earwax. Excess buildup, which is more than the ear can generally eliminate, might result in one or more of the following symptoms: Itching, odor, or discharge – a sense that your ears are plugged or full.